Airbnb horror stories and how to protect your short-term rental

Whether you’re a renter or a host, a traveller or a homebody, you’re probably one of the millions of people across the globe that has turned to websites such as Airbnb or VRBO.com to find accommodations. Whether it’s for a holiday, a quick business trip, or even for those who want to make a little extra cash by subletting their property, these websites are the sure hit.

But what happens when your home, your possessions, and your property get trashed by a renter? Make sure your home insurance covers these special rental situations and don’t hesitate to call us about our specific Airbnb home insurance. Check out these Airbnb horror stories about property rentals gone wrong. 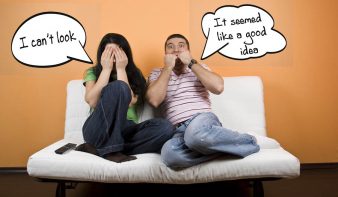 A host named Star King out of Calgary, Alberta rented her condo to two couples who were in town for a wedding, only to have the police contact them late at night in response to noise complaints.

As it turns out, the couples had invited a party bus full of drunken revellers to King’s house, advertising it as a spot for a big post-wedding bash. The partygoers proceeded to ruin King’s hardwood floors, dent her walls, trash her furniture, and plug her toilet with things that clearly didn’t belong in a toilet.

King had to beg to get the partiers to leave (since negotiations were futile due to their drunken nature), and sadly was left with upwards of $50,000 in damage from the party, as well as a tainted opinion of ever renting her property out again.

The squatters who wouldn’t pay up

Another nightmare story involves host Poonam Sandhu of California, who took in two tenants who suddenly stopped paying the rental fee after two weeks of living in her space.

Even more, these renters touched and used all her private possessions, clothing, and toiletries without asking, and started fights amongst themselves that were bad enough to warrant a call to the local police. They even ignored eviction papers which, according to California Law, they were within their rights to do. They were now legally considered tenants and needed 30 days’ notice to vacate the property.

They finally left after Sandhu offered them $1700 to vacate the property, but she was left on the hook for all damages and costs associated. All because the tenants paid her in cash, instead of through the online platform that Airbnb requires for payment.

The hard lesson here? Always read the fine print and reference check your tenants before you rent to them. If Poonam had done so, she might have noticed that these two tenants were career criminals who had pulled the same stunt on many unsuspecting hosts, gaining housing and even money from the host each time they did it.

In places where hotels are expensive and not always discreet, discerning pimps and madams are looking into not only apartments but single room rentals on Airbnb. These single rooms can save a traveler more than one third of the price compared to what one would pay for a hotel.

One man rented his New York City apartment to a traveler who claimed to need a space for his brother and sister-in-law to stay in while they visited the Big Apple.

This turned out to be totally false; there was no brother or sister-in-law. Instead, his apartment was used as a brothel for the duration of the stay. The pimp even set up an online account and used a phone number to advertise the apartment’s address, as well as the services that they were offering.

Unfortunately, with the knowledge and ease of use of social media today, it is increasingly easy to plan and execute these kinds of illicit activities through Airbnb. Airbnb claims that these kinds of incidents are incredibly rare, and they are constantly working and evaluating their security measures to prevent such things from happening.

How to protect your home and yourself

In the meantime, if you are looking for a suitable renter, and want to avoid these kinds of horror stories, you can always ask for references. If that isn’t enough, use a bit more tenacity; check out the potential renter’s social media profiles (Facebook, Instagram, etc.) for any red flag photos.

Also, ensure that you have the correct insurance in place and that you utilize the tools that Airbnb offers to you, including and especially the online payment tool that helps ensure you get paid for your rental. Never agree to take cash from a renter, and always use your common sense when it comes to renting out your property.

If you have any other questions about how you can protect your property as a landlord, you can always contact Square One at 1.855.331.6933 for more information.