Feng shui is the practice of living in harmony with one’s surroundings and maximizing the flow of energy. The practice has its origins in ancient China, but it’s practiced all over the world today.

Feng shui rules inform city planning and architecture, but the most common use is optimizing a home’s energy flow. Read on for everything you need to know about the basics of feng shui. 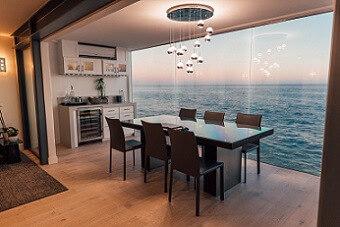 What is feng shui?

Feng shui is a traditional Chinese practice of maximizing the flow of energy, specifically Qi. Qi (sometimes spelled “chi”) is a type of energy believed to be part of all living things in traditional Chinese culture. The meaning of “feng shui” in English is “wind-water.”

The goal of feng shui is to cultivate the flow of Qi in and around people’s living spaces. Modern feng shui is most often used as an interior design philosophy. It helps people maximize the benefits of the Qi flowing through their homes.

Feng shui harnesses the regenerative and destructive cycles of the five elements: Wood, Fire, Earth, Metal, and Water. Keeping these elements in balance is key to good feng shui (more on that further down the page). 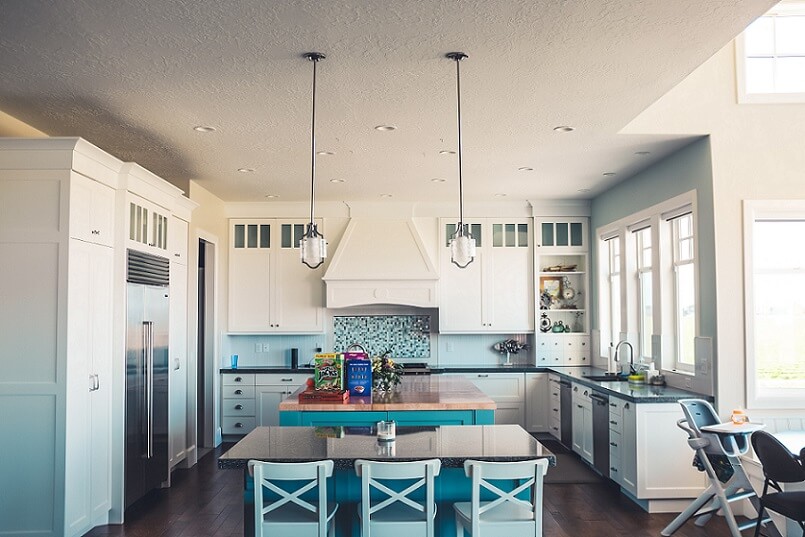 Feng shui dates to the Han dynasty of China (206 BC – 220 AD), or even earlier. Some of the philosophies behind it have been around for five or six thousand years! It was originally used to select burial sites or safe locations for settlements. As the practice evolved, it came to inform locations for grand palaces and monuments, and even the layouts of entire cities.

The People’s Republic of China banned feng shui in 1949, considering it superstition. Even though it is still technically illegal in China, many Chinese people practice feng shui-though not necessarily by name. Feng shui has an enormous following in Hong Kong, where it influences some of the city’s most prominent structures.

There are several different schools of feng shui. The oldest dates to the 1800s, when Yang Yun-sang compiled the first feng shui manual. This manual became the Form School, which interprets energy flow by analyzing the surrounding scenery.

One hundred years later, scholars in northern China formed the Compass School, which uses the points of a compass to analyze the Qi of an area.

The most common school used presently is the Black Hat School, founded in the 1980s. Black Hat feng shui is much easier for novices to follow, hence it’s popularity around the world.

What are the benefits of feng shui?

Good feng shui purports to have many benefits. By balancing the five elements and getting your home’s Qi in order, you can:

…and plenty of other things.

Of course, it’s not as simple as “good feng shui equals perfect life;” each of the desired benefits is in harmony with a different element and a separate area of the home.

This is where feng shui gets a little complex.

What are the feng shui map and compass?

The Black Hat school takes a different approach that even novices can apply to their homes.

It still uses the familiar compass directions. However, instead of treating north as actual north, this method treats the entrance to the home as north. Everything else is aligned accordingly.

Each feng shui direction (or areas of the home) corresponds to a different element and outcome. There are nine areas in total. These nine areas are arranged in a 3-by-3 grid, which functions as the feng shui energy map. It’s sometimes rendered as a compass, and its proper name is bagua. 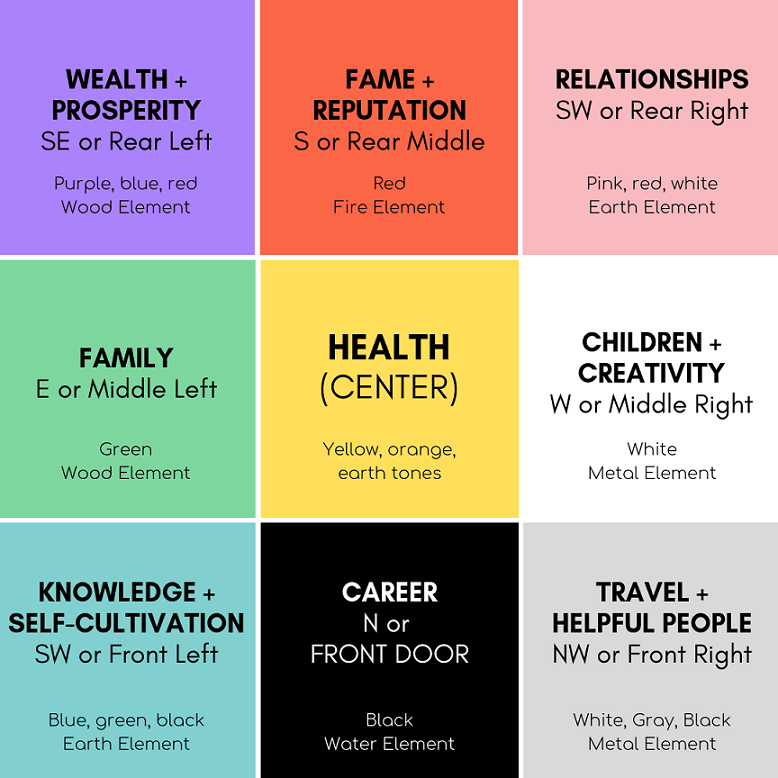 The feng shui compass is usually displayed upside-down from what we’re used to: north is at the bottom.

You’ll notice that the different areas of the bagua are colour-coded; that’s not just for looks. Having furniture or objects of specific colours is key to influencing the elements in each bagua area. Colours are a big part of feng shui.

Once you know how your home corresponds to the feng shui map, there’s still the matter of how to apply the knowledge.

Again, this is the complicated part of feng shui.

The five elements interact with one another like an advanced rock-paper-scissors. The elements and their cycles are known as wuxing. There are two types of cycles: 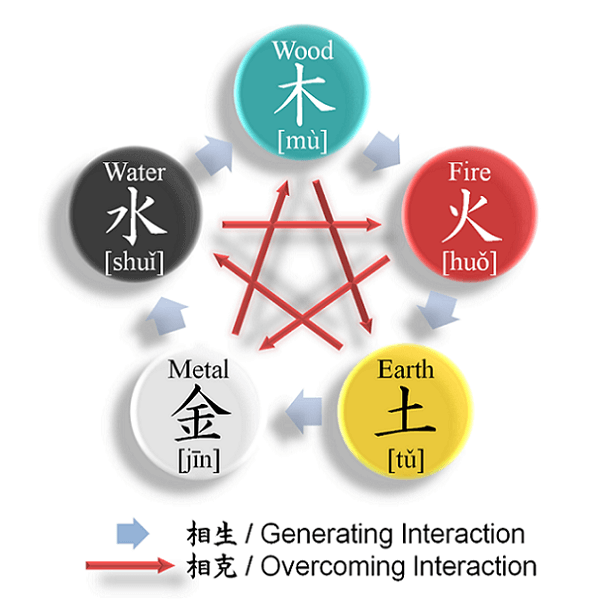 With knowledge of the bagua and the wuxing, we can finally start applying feng shui to the home.

What are the rules of feng shui?

There are a few rules (more like guidelines) to follow when applying feng shui to your home. To apply the rules, you first need to create your home’s unique feng shui map.

We learned about the bagua map in the last section. Depending on which school of feng shui we’re using, the application of the map or compass is different. Let’s stick with the Black Hat school-it’s the most straightforward.

Take the bagua grid from the earlier section and lay it over a floorplan of your home. The bottom middle square is north; that’s where the entrance to the house should be. If your home isn’t perfectly square, the grid might not align perfectly. That’s okay; you should still be able to see which rooms in your home belong to which grid squares, and therefore which elements.

You’ve got your feng shui map.

Now, how about those rules?

Let’s say your living room falls within the southeast square on the map. That’s the one associated with wealth and prosperity. It’s aligned with the Wood element.

To nurture the Wood element in that part of your home, use wood-aligned colours: greens and browns. You can also use the colours of Water: black, or shades of blue. 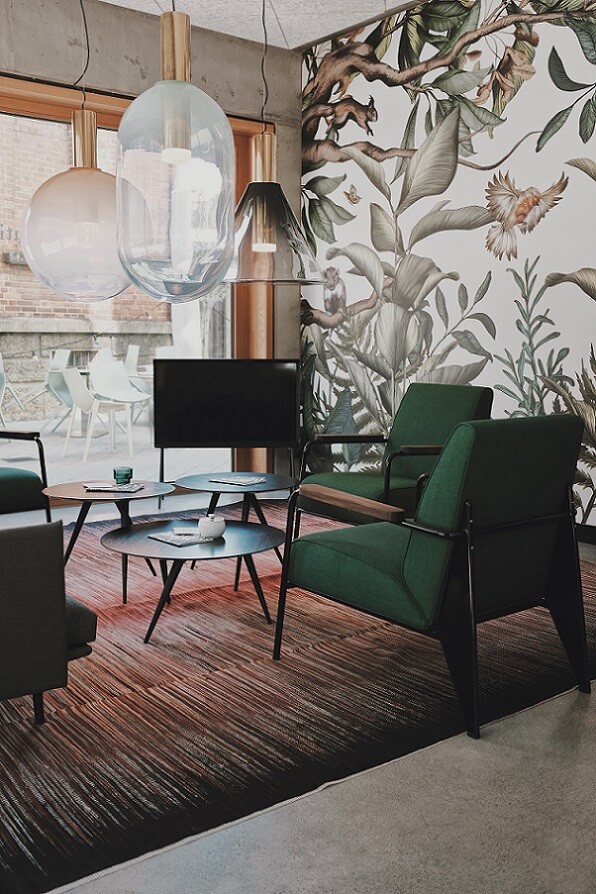 Avoid the colours of Fire and Metal, which weaken Wood: red, orange, white and grey.

Aside from colours, you can also enhance the Wood element with the right décor: lively plants or images of forests and greenery, or even water features like a small fountain.

How to improve feng shui at home

As you can tell by now, feng shui is immensely complex; it can take years of study to learn all the little nuances. There are, however, a few simple tips you can use right away:

If you spend a bunch of money on new feng-shui-optimized décor, make sure the contents coverage on your home insurance policy is high enough to cover your new stuff. If you’ve got any questions about home insurance, give Square One a call at 1.855.331.6933 or get a quote online by clicking the button below.