At any time of year, it’s nice to get some sun in your house, especially when there’s so little of it all winter long. The more windows you have, the more light you’ll get.

There are many different types and models of windows available, whether you’re putting in new windows or simply upgrading old ones. 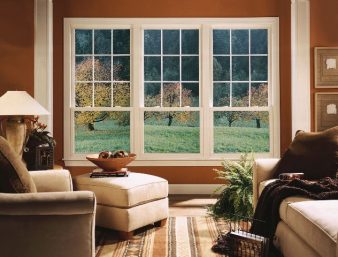 What is a window?

A window is that glass thing that lets light into your home, and can often be opened to let in some air as well. But there are several parts to a window you may not be familiar with:

Now that you’re familiar with the parts of a window, let’s take a look at a few of the different types of window you may encounter:

How do they work?

Well, we all know how windows work to let light in the house. They’re clear glass with the occasional tint. And the operating mechanisms to open and close them are fairly self-explanatory. So why don’t we look at how windows work to help insulate your home?

You’ve probably heard of single and double glazed windows. Single glazed windows are made up of one sheet of glass. As you can imagine, there is very little in the way of insulation here. If it’s cold outside, the glass will naturally get cold, and will transmit that cold inside.

Double glazed windows are quite different. They are made up of two panes of glass with a layer of air or gas in between. This air layer provides insulation, so when the outer glass gets cold, much less of that cold will be transmitted to the inside pane, and thus will keep your home warmer. This double barrier will also prevent heat inside the house from being lost to the outside. Another benefit of double glazed windows is noise reduction.

And if that air barrier is actually an inert gas, such as argon, the insulation properties are even greater. Why? Argon is denser than air, and therefore is less apt to transfer the cold. These windows are sealed in the factory to help prevent condensation from forming and to provide even better insulation.

Often these windows are built using Low-E glass (also known as low-emissivity glass). This type of glass is great for keeping cold or heat out, depending on your climate. Suffice to say, in Canada, we’re most often trying to keep the cold out. Low-E glass is built with an almost invisible metallic layer inside the glass, and a special coating that reflects heat/cold, but lets the light shine through. This comes in varying levels, so you can decide if you want more heat to come in and less to go out (as we do here in Canada), or if you want less heat to come in thereby keeping your house cool.

If your kids are playing baseball near the house, a ball can smash the glass, but besides that, what can go wrong with a window? Well, there are a number of things:

Condensation on the inside

You may occasionally see condensation on your windows. If the window is foggy on the inside (you can wipe it off), it’s likely just caused by an excess of moisture in your home. This could be as a result of a long, hot shower sending steam throughout the home. Or maybe you’ve been simmering something on the stove for a while, or boiling water for tea. These are simple things to control, if you want to keep your windows from fogging up. If you’re noticing the windows fogging up frequently, you might want to check your dryer vent. If it’s not working properly to vent the warm moist air from the dryer to the outside, it could be coming into the house, causing an excess amount of steam to fog the windows.

This is a slightly bigger problem. If your window is fogged up, and you can’t wipe it off, then you know the condensation has built up in between the panes of your double glazed window. The best way to deal with this is to replace the whole window. You could consider just replacing the glass, but the excess moisture will have probably caused some damage to the frame as well. The Family Handyman has a great article, along with illustrations, on why insulated glass fogs.

If you have a breeze coming through your window, even when it’s closed, something’s wrong. It could be that the wood frame around the window has been damaged, by moisture or age, or it’s just shifted and is no longer creating a proper seal. You may be able to fix this problem by adding some weather stripping to fill any gaps. If you notice that the wood frame is rotting, you may be able to get that replaced without replacing the whole window. But if the moisture has been coming in because the seal is broken, you’ll need to replace the window itself.

Check to see if the window is just locked. That could be a very simple thing to fix. Or there could be some rust on the opening mechanism. Try lubricating all of the hardware to see if this helps. If not, some of the hardware may actually need replacing. If the window is stuck shut because of being painted over, cut around the window with a utility knife, or insert a putty knife and tap it with a hammer, to see if this will free it. You may need to use a silicone spray around the window to loosen it up. If all this fails, maybe the window is stuck shut because the house has shifted. It’s time to call a professional. You don’t want to wind up with a badly cut arm, trying to open your window.

What can you do to maintain your windows?

Without proper maintenance, windows may deteriorate, and even rot, over time. Here are a few suggestions:

How do I get all that winter grime off of my windows?

Now that you’ve boosted your curb appeal, it’s time to improve what a lot of people first notice about a home, your windows. During the winter time, your home’s windows often get quite dirty. Spring and summer are the most common times to clean them; after all, how else can you enjoy your new garden with dirty windows? Here are a few tips to help you get this chore done:

The estimated life expectancy for various types of windows, according to the International Association of Certified Home Inspectors, is:

What will your home insurance provider want to know?

Exterior glass is vulnerable to a wide range of possible damage; confused birds, golf balls, vandalism and even hailstorms can make short work of expensive windows. The good news is insurance is available for this kind of damage.

If you own a condo unit, it’s important to determine who is responsible for the glass. Is it you or the condo corporation? Check with your condo corporation to find out; if you have a copy of your condo bylaws, you may also be able to find this information under the “Responsibilities of Unit Owners” section. If you’re responsible for your unit’s glass, talk to your condo insurance provider to see if coverage is provided. Some policies include glass, while others allow you to add glass by way of a special cover.

If you own a vacant property, it’s very unlikely you’ll be able to obtain insurance for your windows. Glass is almost always excluded when a property is vacant.

Home insurance providers will always want to know if you’ve suffered any previous water losses in your home. If there is a problem with leaking around your windows, this could affect your insurance rate, and may even make it difficult for you to find a company to insure you, unless you’ve taken steps to prevent any further damage. If you have any very expensive, specialty windows, such as skylights or stained glass windows, let your insurance company know. Your insurer needs to make an accurate estimate of the cost to rebuild your home should the worst happen. If you haven’t informed them of any specialty windows, you may only have enough insurance coverage to replace them with a less expensive variety.