It seems like we’re always trying to come up with a better way to keep the water flowing smoothly in our homes. But plumbing innovations are not always what they’re cracked up to be. One recent plumbing innovation, known as “Kitec Plumbing”, was introduced in Canada in 1995, and was used until 2007. 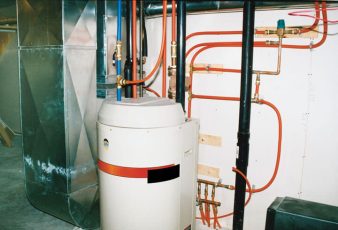 What is Kitec plumbing?

“Kitec” was the most common brand it was sold under, but the following brands were also used:

Plumbers considered this to be a good plumbing system because it was cheaper than copper and being of flexible material, it was easy to install. The pipes are made of polyethylene with a thin layer of aluminum. The Kitec plumbing system usually consists of blue and orange flexible piping and brass fittings. If your basement is finished, take a look near the hot water tank or under your kitchen or bathroom sinks. In addition to the orange and blue pipes, Kitec plumbing systems can usually be identified by the brass fittings, which will usually have one of the following stamps:

If you have Kitec plumbing, you may also find a yellow sticker on the inside of your electrical panel door. These stickers say “Caution: This building has non-metallic interior water piping.” Normally, metal piping is used as an electrical ground. These polyethylene pipes cannot be used as a ground.

Kitec plumbing was used as piping for your drinking water, as wells in for under-floor heating systems, and hot water baseboard heaters. Due to the problems with its tendency to corrode rather rapidly, Kitec plumbing is no longer being manufactured.

How does Kitec plumbing work?

The blue pipes carry cold water, and the orange pipes carry hot water through a home. The orange pipes are also used in radiant heating systems. The pipes were made from polyethylene and a thin inner layer of aluminum. Brass fittings are used to join the pipes together.

The most common issues with Kitec plumbing are:

One of the problems with Kitec plumbing is that the pipes won’t just leak, but are quite likely to burst causing water damage. Unfortunately, it doesn’t appear as though there are any actions a homeowner can take to prevent the pipes from rupturing. The only solution is to replace the entire system.

Class action lawsuits were filed in Canada and the US and recalls began in 2005. IPEX, the manufacturer, and its insurer deny that the system is defective but agreed to a $125 million settlement. This settlement fund is intended to pay for repairs in homes where the Kitec plumbing systems failed. Claims can be made until the year 2020. Any funds remaining after 2020 will be distributed to those who own homes with Kitec plumbing systems that have not failed. In both cases, the homeowners must file a claim through the Kitec Settlement claim form.

What can you do to maintain your Kitec plumbing?

Some plumbing experts say the question is not IF your Kitec plumbing will leak, but WHEN it will leak. If you have Kitec plumbing in your home, you may want to call in a licensed plumber or certified home inspector to take a look. In the end, you may have to replace all your piping and fittings. According to The Star, Kitec plumbing replacement costs for a one-bedroom suite can exceed $6,500.

Kitec pipes were used in homes starting in 1995. The first fitting recalls occurred in 2005, which suggests that the average life expectancy is somewhere short of 10 years.

Home insurers definitely want to know what kind of plumbing you have in your home, especially if you plan on buying a home with Kitec plumbing. If that particular type of pipe is prone to leaking, they may refuse to insure you. Or they may insure your home, but increase your deductible or decline to cover losses caused by a malfunction in your plumbing system. Determine what type of plumbing you have in your home, and be honest with your insurance agent. You don’t want to have coverage denied in the event of a loss because incorrect information was supplied at the time of application.

The right insurer will work with you to provide the best coverage possible. If you do need to have your plumbing replaced, you can consider it an investment in your home, and your peace of mind.

Will my home insurance cover water damage from burst plumbing?

Typically, home insurance policies include coverage for any sudden or accidental escape of water in your home, including ruptured water lines, or overflowing appliances. This is why insurance companies ask what type of plumbing you have in your home. They need to be able to accurately assess the risk in order to charge the right rates and provide you with the right coverage. Sometimes, depending on your plumbing situation, a company may not be able to insure you at all, and you’ll need to shop around, and likely pay a higher rate, if you can find coverage at all.

Don’t let this tempt you to tell a little white lie to your insurance broker. This can be construed as “misrepresentation” and can void your policy when it is discovered. Your best course is to always tell the truth. If you discover that the only solution is to replace your plumbing, the expense will be a lot less than finding out, after a loss, that you have no insurance coverage!

When you have a policy in place, remember that there are always exclusions and limitations. Always read your policy wording, with an emphasis on any water exclusions. You can contact your insurance agent or broker if you have any questions. In most cases, there is a requirement that you either shut off your main water supply, or arrange to have your home checked daily, if you are going to be away more than a few days during the winter. If you fail to do this, damage caused by frozen or burst plumbing may not be covered. The requirements differ from one company to the next, so before you go away on vacation, you would be wise to give your broker a call to make sure you’re complying, and that coverage will be in place.

Other tips to prevent water damage inside your home:

Tips to stop water from coming into your home:

If you have any other questions, you can always contact Square One at 1.855.331.6933 for more information or to get a home insurance quote.

Getting to know Kitec plumbing