(Vancouver, BC): British Columbia, and the Greater Vancouver Area, is known worldwide for its amazing natural beauty. It’s also known worldwide for the large amounts of rain it receives year-round. As a BC resident, you can never have too many umbrellas to protect you from the rain. With this in mind, the team at Square One Insurance decided to surprise Canada Line commuters by giving away hundreds of free, bright orange umbrellas this morning.

The company is providing the free umbrellas as part of its official launch in the BC market. “We wanted to think of a clever way to tell people about Square One,” says Daniel Mirkovic, President & CEO. “Having an umbrella to protect you against the rain is a must in BC. The same can be said for having the right home insurance policy to protect you against the unexpected.”

Over 500 transit commuters received free umbrellas at the Waterfront Canada Line station this morning between the hours of 7:00 am and 9:00 am. And, another 500 umbrellas will be given away on Thursday, March 15 to Vancouver Centre Canada Line commuters between 7:00 am and 9:00 am. To get your free umbrella, be one of the first to visit the Square One team at the Vancouver Centre Canada Line station on Thursday morning. 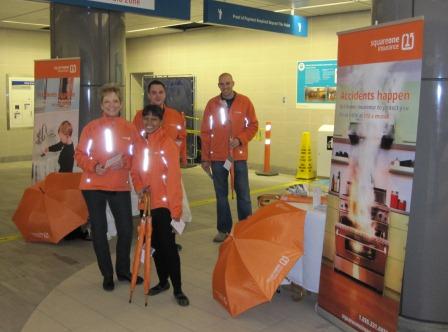 Established in 2011 and based in Vancouver, British Columbia, Square One Insurance provides Canadians living in urban centres with modern, relevant home insurance. Square One is one of the few providers in Canada specializing in home insurance and offering truly customized policies that can be purchased over the phone and online. For more information about Square One, visit our www.squareoneinsurance.com.